Here are some Clyman pictures. We welcome your contributions! 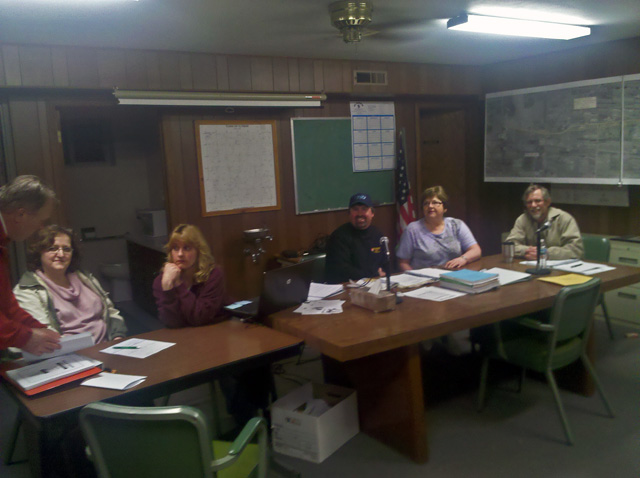 Previous Town Board members meet for their last time together 4/11/2011.

The Town Board enjoys the company of 1st Supervisor Nancy Schlender (2nd from right) and Town Clerk Chris Spilker (2nd from left) as they wrapped up their last meeting together April 11, 2011. Nancy declined to serve for another two year term after having served for two terms as 1st Supervisor and three terms on the Planning commission. Chris declined to serve another two year term as Clerk after having served one term as Clerk and one term as Treasurer. Both women did an outstanding job of fulfilling their duties and the Town of Clyman is grateful for their dedicated contributions.

At this evening's meeting, Stan Jones (furthest left) agreed to take on the position of the Appeals Board Chairman. Sandy Thoma (just to the right of Stan) begins her second term as Town Treasurer after having run unopposed in the April 5th election. After having won the April 5th election, Dave Blank (center with cap on his head) will serve his third term as Town Chairman. Previous to accepting the Town Chairman position, Blank served for two terms as 2nd Supervisor and 16 years in various positions on the Clyman Fire Department. Chuck Burkholz begins his second full term as 2nd Supervisor after having run unopposed in the April 5th election. Burkholz stepped into the position to replace Daryl Bailey who moved away from the town of Clyman and resigned mid-term as 2nd Supervisor.